Turmoil in the oil industry means both opportunities and threats to energy companies are at hand. Mergers and acquisitions will play a key part as oil prices fall and eventually rise again. But while M&A activity can strengthen a company’s portfolio, it can also distract from bigger issues or even destroy value if not effectively managed.

While low oil prices have not been driving a high level of deals to date, we have seen companies restructuring their businesses and divesting non-core assets. Other companies, particularly in the oilfield services sector, are merging and reducing capacity. However, with the continued depressed oil price the potential for distressed sales and role ups in fragmented areas of the market, together with a drive towards an increase in asset quality will potentially accelerate the M&A activity in the coming years.

In reality, most deals fail to deliver on their original expectations. A recent University of Virginia study found that the failure rate has historically been as high as 70 percent historically. During prior downturns we have seen mergers that failed to deliver expected value. In extreme cases, they proved to be distractions that allowed competitors to seize opportunities when the market turned. For example, Tony Hayward remarked that following the Amoco and Arco deal the dramatic private equity multiple expansion that marked their creation was followed by a decade of multiple contractions. This is rarely due to the post-merger integration process. Instead, deals typically fail because of a lack of strategic follow-through and leadership, failure to appreciate the complexity of the deal, or failure to transition the company back to business as usual.

Doing deals in a down market has never been easy. The broad shift in market dynamics that the energy sector is now witnessing requires new innovations and operating models to ensure success. Effective integration of M&A targets has never been more essential, driving for short term value while repositioning the business for long-term delivery. 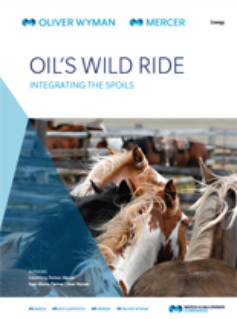