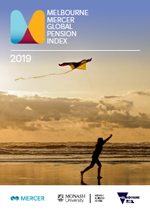 A strong correlation exists between the levels of pension assets and net household debt, with growth in household debt in developed and growth economies paired with the growth in assets held by pension funds, according to the 2019 Melbourne Mercer Global Pension Index (MMGPI).

The report is the first international study of its kind to document the “wealth effect” – i.e. the tendency for spending to increase with rising wealth – in relation to pension assets. The MMGPI’s data suggests as pension assets increase, individuals feel wealthier and therefore are likely to borrow more.

India inches up in the overall index as compared to 2017 and 2018; marginally higher than 2018 in all the three sub-indices of adequacy, sustainability and integrity. The improvement is due to slight increase in scores across various dimensions, including net household savings; greater flexibility in managing retirement and part time work; steady progress in governance and reporting around private pension plans.

The forward-looking development of draft wages and social security reforms that have been initiated, indicates the intent of policy makers in creating an inclusive and sustainable pension system.

Atal Pension Yojana (APY) is a scheme available to all citizens below the age of 40 but is aimed at the unorganized sector and encourages them to save voluntarily before retirement. Its subscriber base was already over 1.71 crores as of August 2019 and is expected to increase by 4 to 5 lakh new members every month.

The government has introduced three new schemes for different segments of workers in the unorganized sector- (i) PM Karam Yogi Maan-Dhan Scheme for retailers and shop keepers, (ii) PM Kisan Pension Yojan (PM-KMY) for small and marginal famers and (iii) the recently announced contributory scheme, Pradhan Mantri Shram-Yogi Maan-Dhan (PM-SYM) that covers workers in the unorganized sector with equal contribution by the government.

Given the demographic diversity and the large percentage of workforce in the unorganized sector, reforms in the pension system will take time to manifest themselves. The index value can further be enhanced by complementing above reforms with greater participation of the organized sector in supplemental pension plans.

Preeti Chandrashekhar, India Business Leader, Health & Wealth, Mercer further explained, “India Inc. on its part understands the importance of financial wellness and the need to encourage the employees to build a retirement corpus. With the general trend moving towards defined contribution voluntary plans, the companies are focusing on building awareness among employees on the need to save towards retirement. Enhanced communication and awareness should increase engagement and greater participation in pension arrangements in the organized sector.”

The MMGPI, supported by the Victorian Government of Australia, is a collaborative research project between the Monash Centre for Financial Studies (MCFS) – a research centre based within Monash Business School at Monash University in Melbourne – and professional services firm, Mercer.

The Index compares 37 retirement systems across the globe and covers almost two-thirds of the world’s population. It highlights the broad spectrum and diversity of the world’s pension systems, demonstrating even the world’s best systems have shortcomings. The 2019 Index includes three new systems – Philippines, Thailand and Turkey.

The Netherlands had the highest index value (81.0) and has consistently held first or second position for 10 out of the past 11 MMGPI reports. Thailand had the lowest index value (39.4).

Dr. David Knox from Mercer, author of the study, “Systems around the world are facing unprecedented life expectancy and rising pressure on public resources to support the health and welfare of older citizens. It’s imperative that policy makers reflect on the strengths and weaknesses of their systems to ensure stronger long-term outcomes for the retirees of the future.”

“Although some systems are still anchored by defined benefit schemes that may practice liability-driven investment strategies, defined contribution plans are playing increasingly important roles in the accumulation of individuals’ retirement savings. Maximising risk-adjusted investment returns for defined contribution plans by diversifying the assets held by a pension fund is critical,” said Professor Deep Kapur, Director of the MCFS.

“It’s essential the state pension or retirement age is reconsidered in line with increasing longevity – a step some governments have already taken – to reduce the costs of publicly financed pension benefits,” he said.

About the Monash Centre for Financial Studies

A research centre based within Monash University's Monash Business School, Australia, the MCFS aims to bring academic rigour into researching issues of practical relevance to the financial industry. Additionally, through its engagement programs, it facilitates two-way exchange of knowledge between academics and practitioners. The Centre’s developing research agenda is broad but has a current concentration on issues relevant to the asset management industry, including retirement savings, sustainable finance and technological disruption.