Mercer, a global consulting leader in advancing health, wealth and careers, and a wholly owned subsidiary of Marsh & McLennan Companies (NYSE: MMC) today released its 2018 Quality of Living ranking. The survey is conducted annually with the goal of enabling multinational companies and organisations to compensate employees fairly when placing them on international assignments.

Hyderabad retained its position as the top Indian city for the fourth year in a row and is joined by Pune as the two cities ranked highest among the seven Indian cities surveyed. New Delhi, on the other hand, was the lowest ranked city in India for the third consecutive year and continues to face challenges in traffic and air quality. Other traditional metros, including Mumbai, Kolkata, Chennai and Bengaluru also ranked lower on the Quality of Living Index than the relatively newer technology hubs of Pune & Hyderabad – which both ranked at 142, with Pune jumping up three spots this year.

Vienna again topped the list that includes 450 cities globally. It is Vienna’s ninth consecutive at the top of the Index, followed by Zurich (2), Auckland and Munich in joint third place. In fifth place, Vancouver completes the top five and is the highest ranking city in North America. Singapore (25) and Montevideo (77) are the highest ranking cities in Asia and Latin America respectively.

While some of the highest increases in living standards over the last 20 years have been observed in Eastern European cities, Asia has not been too far behind. Specifically, this has been driven largely by India & China, as the fastest growing economies, with its cities showing most improved living standards in Asia between 1998 and 2018. 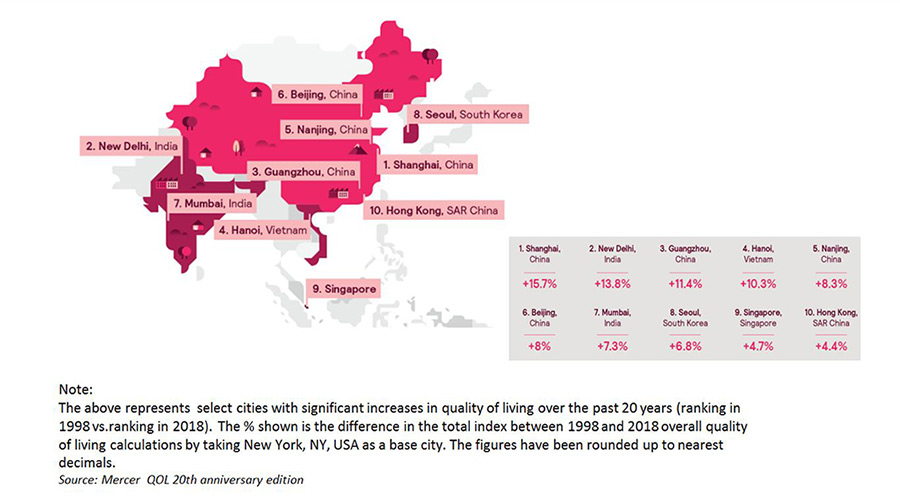 "The results show that Indian cities are yet to make any marked leaps on the quality of living scale, from 2017. However, this is the 20th anniversary of our survey globally and, though few Indian cities have decreased in their ranking, over a 20 year period, these cities have been continuously improving the living standards. A key driver has been  the considerable  investment in physical infrastructure  including airports , public transport & communication facilities – among the many factors used to evaluate  city living standards,” noted Padma Ramanathan, India Practice Leader, Global Mobility.

In 2018, more modest improvements in cities such as Chennai, demonstrate some growth as a result of better access to airport with metro facilities and enhanced international connections. While Hyderabad and Pune have jumped up rankings this year, they have also done so relative to other cities, while showing negligible change on  factors evaluated. Environmental factors such as relatively lower crime and climate hold Hyderabad in relative good stead, while Pune attracts due to its averagely good housing facilities and good availability of consumer goods for international employees. Mumbai has kept its ranking at 154, the same as last year. Almost all Indian cities surveyed scored highly on factors such as communication and access to food consumables.

Bengaluru (149) has shown a drop in its ranking this year by three spots, on account of rising safety related issues. An increase in petty & other crimes has negated benefits of improved public services through the metro line system and its attractiveness due to easy access to a variety of consumables, good climate and a fair range of housing. Unrelenting inconvenience due to daily electricity and water related shortages has also impacted overall positioning, and advantages which the city otherwise offers. New Delhi (162) has dropped its ranking by one place, with no visible redressal in sight to the rising traffic congestions and air pollution woes.

“As traditional megacities pose risks in relation to hygiene factors such as rising air pollution, ease of housing and growing traffic woes, emerging cities are seeing the benefit through improved infrastructure, accessible health services and lower crime rates,” said Padma Ramanathan. “Air pollution is among the biggest threats posed to daily life and quality of living in megacities.,” she added.

This year, Mercer provided a separate ranking on City Sanitation, which analysed cities’ waste removal and sewage infrastructure, levels of infectious disease, air pollution, water availability and quality - all important aspects of a city’s attractiveness for both talent and businesses.

Honolulu topped the City Sanitation ranking, followed by Helsinki and Ottawa in joint second, whereas Dhaka (230) and Port au Prince (231) filled the bottom places. Amongst Indian cities, Bengaluru is ranked the highest at 194, followed closely by Chennai (199) and Pune (206). However, both New Delhi and Kolkata rank among the bottom five cities worldwide in terms of city sanitation, closely following each other, at 228 and 227 respectively. Kolkata is afflicted by challenges on factors of water potability & insufficient waste disposal systems.  A combination of factors including high air pollution, infectious diseases, inadequate waste removal and sewage infrastructure brought Indian cities relatively low.

In addition to valuable data on relative quality of living, Mercer’s surveys provide hardship premium recommendations for more than 450 cities throughout the world. This year’s ranking included 231 of these cities.

The data was largely analysed between September and November 2017, and it will be updated regularly to account for changing circumstances. In particular, the assessments will be revised to reflect significant political, economic, and environmental developments.The list of rankings is provided to media for reference, and should not be published in full. The top 10 and bottom 10 cities in either list may be reproduced in a table.

The information and data obtained through the Quality of Living reports are for information purposes only and are intended for use by multinational organisations, government agencies, and municipalities. They are not designed or intended for use as the basis for foreign investment or tourism. In no event will Mercer be liable for any decision made or action taken in reliance of the results obtained through the use of, or the information or data contained in, the reports. While the reports have been prepared based upon sources, information, and systems believed to be reliable and accurate, they are provided on an “as-is” basis, and Mercer accepts no responsibility/liability for the validity/accuracy (or otherwise) of the resources/data used to compile the reports. Mercer and its affiliates make no representations or warranties with respect to the reports, and disclaim all express, implied and statutory warranties of any kind, including, representations and implied warranties of quality, accuracy, timeliness, completeness, merchantability, and fitness for a particular purpose.

Mercer also helps municipalities to assess factors that can improve their quality of living rankings. In a global environment, employers have many choices about where to deploy their mobile employees and set up new business. A city’s quality of living can be an important variable for employers to consider.

Leaders in many cities want to understand the specific factors that affect their residents’ quality of living and address those issues that lower a city’s overall quality-of-living ranking. Mercer advises municipalities by using a holistic approach that addresses the goals of progressing towards excellence and attracting both multinational companies and globally mobile talent by improving the elements that are measured in its Quality of Living survey.